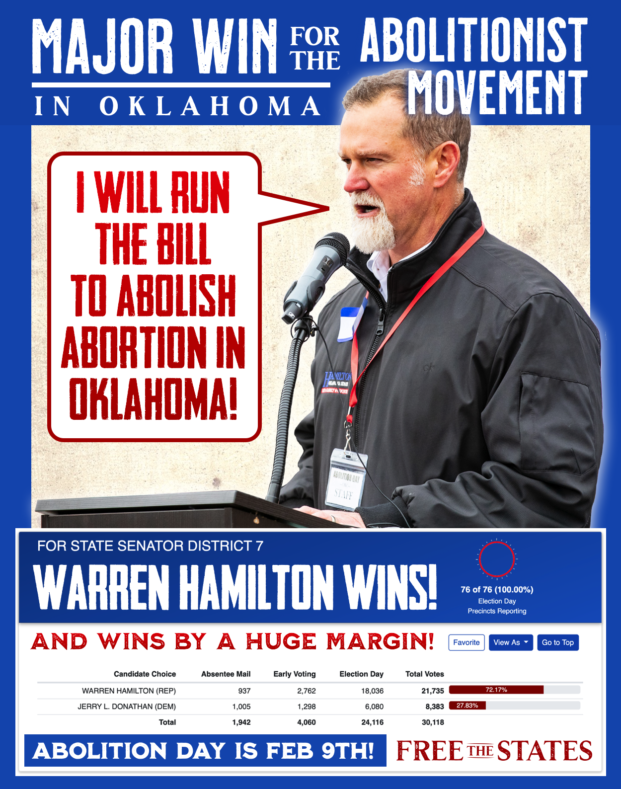 Look, we know ourselves. We are always VERY SHRILL about how local legislatures are the most important players in the fight for abortion. They pass the laws that screw us the hardest, the same laws that end up in front of our “Handmaid’s Tale”-cosplaying SCOTUS.

Well, get ready, because we’re about to be VERY SHRILL AGAIN.

The “abortion abolitionist” movement had two major victories in Tuesday’s elections. Two men endorsed, celebrated and kiiiiiiinda borderline worshipped by the extremist anti-abortion Operation Save America group just won their elections. John Jacob became a state rep in Indiana and, in Oklahoma, a man named Warren Hamilton was elected to the state senate. They ran and won on ABOLISHING abortion from their states, with no exceptions.

No matter who becomes president — maybe we will know by the time you read this! — these two men and people like them all over the country are being elected to destroy abortion access. They are laser-focused. They never, ever take their eyes off that ball. They’re not just like a dog with a bone, they’re like a border collie on Adderall with a bone they think is a sheep.

Jacob’s Facebook posts are all about “defending the unborn.” When he’s not posting about abolishing abortion, he’s advocating for the right to bear arms … to defend the unborn. Because, for these guys, it’s all connected. They can Kevin Bacon ANYTHING back to abortion. They could Kevin Bacon actual bacon to abortion.

These people might seem “fringe” to you, but hi, this is a blog post about how these two men, with the backing of OSA, just got elected to state-level office. They’re screaming their mission from the mountaintops, while we’re still begging politicians to get up that dang mountain and SAY “abortion.”

Say “abortion.” Be shrill about it. Because this is what we’re up against.