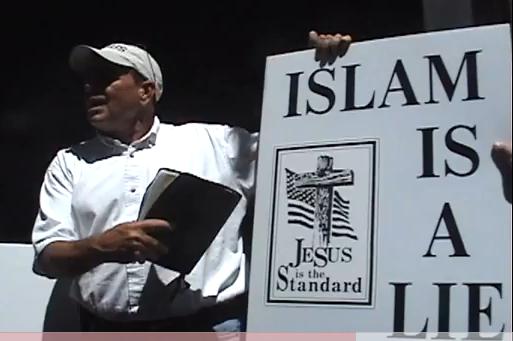 As we told you, OSA started as Operation Rescue and got famous blockading a Wichita clinic for almost seven weeks  in 1991. The abortion doctor at that clinic, Dr. George Tiller, was assassinated in his church in 2009.

Operation Rescue’s clinic-blockading antics turned into a campaign called “No Place to Hide.” You know, they’re basically spelling it out for us.

In 1993, Michael Griffin murdered Dr. David Gunn at his clinic. At the time OSA’s own Matt Trewhella signed a statement calling this murder “justifiable.” The same Trewhella that spoke at OSA’s hatefest THIS week.

Operation Save America always tries to create plausible deniability when anti-abortion people commit actual violence, but we do have EYES, you know. Some of the people who signed this “justifiable” homicide letter were members of the anti-abortion terrorist group Army of God.

The Army of God website is terrifying, gruesome, unsettling. On the front page you read “George Tiller, The Babykiller, reaped what he sowed.” They have a manual that’s basically instructions for clinic violence and shines a terrifying spotlight on how far they should go to stop abortion.

Are we adequately conveying how terrifying they are? If not there’s a whole documentary about how they genuinely believe executing doctors and bombing clinics is what God wants them to do.

How are these two groups related? Matt Trewhella, mostly! He headlined Army of God’s White Rose Conference in 2001 and wrote a blog post on their website about punishing women for abortion. Plus I mean … we did show you this picture, right?

But it’s not just Trewhella, it’s also about who Operation Save America associates with.

@RightWingWatch points out here are some of the people who show up for OSA events.

And again, their language is all about how far you should go to stop abortion. They preach that you should ignore Roe. They claim everyone who’s not like them is ruining America. They ought not act surprised or indignant when people say they’re responsible for violence. They are dangerous.

That’s really what we want to leave you with. Sure, they’re a bunch of losers who can’t work Zoom. But their ideology leads to violence. And it makes patients and clinic workers unsafe. And that’s why we have to counter them whenever we see them.