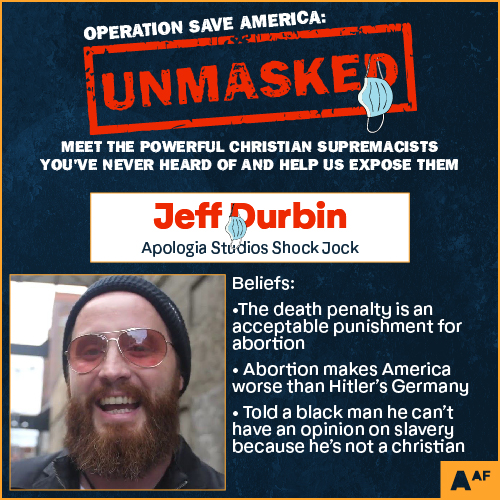 We’ve got another bad dude for you today! Meet Jeff Durbin, the bearded shock jock talker for Operation Save America. He’s a producer at Apologia Studios, which is kind of like “The 700 Club,” but for lonely millennials and men’s rights beardos.

Apologia Studios produced “Babies Are Murdered Here” and its follow-up “Babies Are Still Murdered Here,” neither of which, sadly, are campy horror movies starring Jennifer Love Hewitt and Sarah Michelle Gellar, but instead are about harassing patients outside of clinics.

Their videos are often just footage from patients just trying to enter the effing abortion clinic. And harassers justifying their harassing. Look, we watched them so that you never have to.

We wish these guys were as fringe as their beards are robust, but their YouTube channel has over 200k followers and over a thousand videos. They love Premiere almost as much as they hate people with uteruses!

Also not for nothing, their most recent video is called “Masks and Government Authority.” So real quick: if you have a uterus you’re a KILLER if you have an abortion but if you COVID-cough all over a Panera b/c you don't want to wear a mask… you just love liberty??

We’re just gonna leave you with the fact that Durbin is allegedly a world champion martial artist who goes by the nickname “The Ninja.” These people are definitely not compensating for things and are NOT losers.