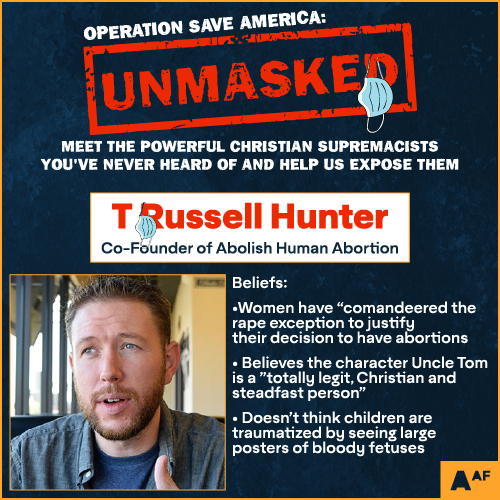 OK folks, we introduced you to the beast, Operation Save America, now it’s time to go deep on the affiliates, whose websites have the most deranged, upsetting “about us” pages we’ve ever seen. First up, Abolish Human Abortion!

Meet T. Russell Hunter, the leader of Abolish Human Abortion. When he’s not drawing pictures of demons giving abortions, he’s arguing that rape exceptions for abortions are THE WORST!

You might ask “why the eff are they using the word “abolish”? They say “every age has its evils, every age has its abolitionists.” We know this is putting a bow on it, but they think abortion is just like slavery. They are delusional.

Being “pro-life” is NOT hardcore enough for them. They want abortion ERADICATED, absolutely no exceptions. Here’s how their “ideology” page starts.

Again, sorry for all the scary quotes but here’s one more: “Abolitionists are Christians applying their faith to culture enslaved to sex and in love with death.”

Side note: we just want to point out the dissonance of reading PAGES and PAGES of the most humorless, punitive interpretations of the Bible, and then you scroll down and see a page for “abolitionist memes.” Very serious memes, we're sure.

Again these people think the true law is the law of God, that abortion is against that law, and because of that it is their duty to ACT against abortion, even if they break the law. Dope. Later we’ll talk about how they lobby politicians! LOL don’t hate the player, hate the game we guess!

So we talked about AHA. Now let’s talk about it's brother org (they would never say sister), Free the States, AKA the EMILY’s List for white dudes running for office on a “death penalty for abortion doctors” platform!

The “what we believe” section of their website  is an absolute waking nightmare. Under “criminalization” they say, “If abortion is murder, and we all know it is, it ought to be treated as such.” JESUS CHRIST! They think anti-abortion people don’t go HARD ENOUGH!

Heck, here’s that whole paragraph. Again, they think pesky things like “rape exceptions” or “viability” or “the health of the mother” just make these MURDER LAWS more palatable to the public. All or nothing for these monsters!

Another “What We Believe” for Free the States is “Ignore Roe.” Here’s them getting BIG MAD at other anti-abortion groups for even frickin’ acknowledging that SCOTUS exists. They’re like “F*ck SCOTUS! We are the law!” OK anyway on to the LOBBYING… Free the States tries to get bills that call for abolition passed, like the Abolition of Abortion in Oklahoma Act. They want to send shockwaves through the anti-abortion community by showing that abolition is possible. Yeah, that’s right, they’re the BAD BOYS of anti-abortion.

On their site they list states that have attempted “abolition” (again, their word, we’d never use it) bills: Oklahoma, Texas, Indiana, Washington, Idaho, Arkansas.

It doesn’t really matter how far these bills have gotten, what matters is that these extremists are trying to infiltrate the government and they’re getting meetings with political leaders. Elections matter, folks. State senators and state congressmen can pull a lot of BS!