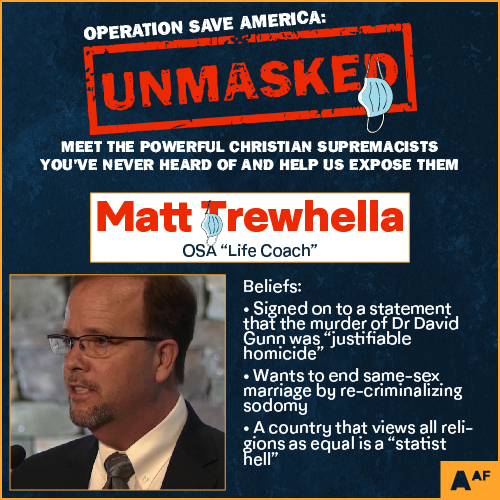 Today we’re introducing you to the EVEN MORE AGGRESSIVE side of Operation Save America! It’s time to learn about Missionaries to the Preborn (we’re sorry, so sorry you have to learn that name) and Defy Tyrants!

First up, meet the founder of both groups, Matt Trewhella. Just, you know, a chill dude who wrote a book called “The Doctrine of the Lesser Magistrates: A Proper Resistance to Tyranny and a Repudiation of Unlimited Obedience to Civil Government” and advocates for violence!

You might ask, why did he found TWO groups? Maybe he just loves to found things! First up Missionaries to the Preborn, its mission is to hold posters with images of bloody fetal remains (often doctored) in front of abortion clinics to scare patients.

They’re PROBABLY what you think of when you picture an anti-abortion protester. Gruesome, cruel, in it for the shock value, bad guys.

OK onto Defy Tyrants! The name really says it all. They think if politicians pass laws they don’t agree with they should not ONLY ignore them but also ACTIVELY fight against them. And to them “tyrants” means anyone who makes them do things they don’t want to do!

Their focus is mostly abortion, but SURPRISE! To them “tyrants” can also be … face masks! Some recent Defy Tyrant blog posts include: “The Real Evil Headed our Way: Contact Tracing” and “Misdemeanor for No Face Mask: Will there be Defiance in Washington?”

Sidenote: we just want to note the section of their website on “Second Amendment.” Is that GOD’S LAW, friends? That’s not a “tyrant” law too? Dope, dope dope dope. Also they like cops. Cops are never tyrants, we guess.

You know who are tyrants to them? Duh, abortion providers. Trewhella signed a letter calling the murder of Dr. David Gunn “justifiable homicide.” And he’s a pastor! What a very warm pastorly message!

These groups are terrifying and we can’t look away. They think they’re above the law and they also have a shifting idea of what God’s law even means. Ask yourself: how far do you think they’d go in their pursuit of their “justice”?

One thing’s for certain: We wouldn’t want one of these maniacs standing between us and a completely safe medical procedure.