What is
40 days for life: unmasked?

40 DAYS FOR LIFE: Unmasked is part of a larger project from Abortion Access Front (AAF) called “Hypocrites Unmasked.”
The anti-abortion movement is a hydra of dangerous, hypocritical factions, each with its own unique characteristics. So AAF created Hypocrites Unmasked to break them down, so folks can learn what sets each faction apart, the terrifying tactics they use, and the influence each group wields in their own communities and nationally, with politicians on the local, state, and federal level.
“40 Days For Life: Unmasked” is dedicated to exposing the mission, tactics and influence of the anti-abortion Christian extremist organization 40 Days For Life.
With each organization we “unmask” you will learn about their history, their mission, see videos of their harassment and see firsthand how their tactics affect patients, providers and access to reproductive care. We track their every move throughout the year, and when they hold events, we organize calls to action to counter them with truth and humor, to raise awareness about the harm they cause, to help protect clinics from their harassment, and to hold the politicians who promote their dangerous beliefs accountable.
We also use these “unmaskings” to expose the intersections between these groups and white nationalists, anti-LGBTQ+ groups, and other extremist organizations.

Time to Meet the bullies hiding behind the rosaries

But you know what? This “kinder, gentler” act is BS. There is no right way to oppress. There is only oppression.

Here’s everything you need to know about the dangerous tactics and actions of the anti-abortion extremist outfit of 40 Days for Life.

What are the tactics of
40 Days for Life?

TWICE a year, once for the duration of Lent and then again in the fall, 40 Days for Life coordinates 40 days of massive gatherings outside of hundreds of Planned Parenthoods and independent clinics across the country. They give local organizers resources to hold “non-stop, round-the-clock prayer vigils,” meaning protesters sign up for shifts to harass patients and clinic staff all day every day. (All while fasting!)
Sadly, it’s effective — the 40 Days people brag that that “no-shows” at clinics can skyrocket by 75 percent during their 40 days of hate. To put an even finer point on how successful they are, they had record numbers of (largely maskless) harassers during the 2020 COVID-19 pandemic.
Enough of this abusive bullshit. Let’s be clear: there is nothing peaceful about a large group of people who haven’t had breakfast staring you down outside a doctor’s office, performatively praying for your soul, and letting you know your salvation is on the line. It’s manipulation. It’s intimidation. It’s its own class of violence.
They may not hold the graphic signs, or be the loudest screamers in the anti-abortion movement, but the goal of 40 Days for Life is the same: to solidify patriarchy by ending access to birth control and to straight up end abortion in all forms. Their brand of oppression just looks less like these guys and more like a passive-aggressive midwestern aunt.
But ultimately, the harm is the same.
To illustrate what these “prayer vigils” look like, read about this 40 Days attack In Charlotte, North Carolina where hundreds of people show up every day to protest outside of A Preferred Women’s Health Center.

What does aaf do
to "unmask" them?

So many things! Take that Charlotte fiasco: AAF helped provide financial assistance so “guestcorts” (clinic escorts from across the country) to travel to support the clinic in Charlotte that day so they would have backup. We join forces with many clinics and awesome community partners to protect and clap back when these monsters show up to intimidate and bully at their clinics.
We show up.  In pre-Covid days, we traveled to clinics to help in person. We’ll do it again in post-Covid days! We organized a “welcome committee” to greet a literal 40 Days for Life tour bus that pulled up in front of the independent clinic we were supporting in Raleigh, North Carolina, with a hysterical counter-protest and freshly painted mural to tell them how we felt.
Previous
Next 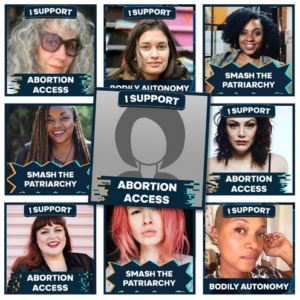 We also have a virtual campaign called 40 Days of Possibilities. With this action, Abortion Access Front is calling on everyone to step up and say ENOUGH of this harassment disguised as prayer. The media and our elected officials need to recognize the real harm of 40 Days for Life and how it contributes to the larger culture of violence that clinics and patients face, and promotes the devastating laws that continue to chip away at abortion access.

Want to be part of our next unmasked action? get involved!

Whether it’s March For Life, Operation Save America, or any of the other groups we decide are due for a good old UNMASKING, go to the Get Involved tab up top to find out how YOU can be part of our Truth Squad.
Join our mailing list to get updates on when our next action is and how you can help. We’ll see you up with tool kits and all the info you need to join us! Also, if you sign up, you’ll get updates about our amazing comedy shows, webinars and other dope events we do all year
Previous
Next

ready to do even more?

to become part of AAF’s inner coven, we mean circle, which gets to help plan our actions and get them off the ground. If you’re down for it, we’ll put you to work! 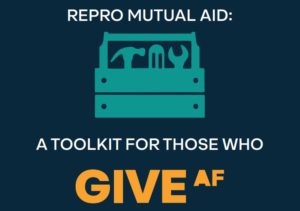 Let's get to work!

40 Days For Life: Unmasked is part of a larger AAF project called Hypocrites: Unmasked, which educates the public about the tactics and influences of different organizations within the anti-abortion movement.